Let me start by saying.. we love you Google.
Having got that out of the way, what is going on?

Once apon a time you could bank on good search results in Google. Results that made sense and most often gave you what you were looking for besides one or two other results. Then along came SEO, which we figure must have caused Google great concern because SEO used the algorythym to play Google against itself but in favour of who was doing the SEO.

Now I realise that what I am about to talk about is a small slice of a much (much) larger pie, but it is relevant all the same.

My two biggest bug-bears at the present time are:

OK, here are examples of what I am saying.

Once apon a time, when you searched for something on Google, it would not be until Page 3 before you would start seeing repeated results from the same web site.  Now days, its all you see for the first three pages.  The same companies, the same result, often different pages but on the same domain.

SEARCH TERM: “sales dream takes off on the internet”

In almost every result, the correct opening paragraph included: Sales dream takes off on the internet. The Age 3/06/2013 | Two years ago entrepreneurs James van Rooyen and Jonathon Allara were making a modest income …

but when you click on any of the 167 links, not one showed the actual page I was looking for, suggesting that when they did originally post the article, a link to it appeared on every page of the investsmart.com.au web site, and GoogleBot has come along and indexed every page that had that headline on it.  Great for investsmart.com.au, but crap for anyone looking for the headline.

Now for all you people bleating, but you used “quotation marks” in your search..

SEARCH TERM: sales dream takes off on the internet

My point here, is that neither search returned the result I was after (TheAge) and the search for the closest headline returned 3 pages of the same domain, but then I noticed these anomalies.

Hold on, sub-domains = duplicate content + theage.com.au owns investsmart.com.au, so its another example of same result.

And being totally frank, I could not find the original article that I read at TheAge.  Maybe it was because it wasn’t in the news section but Business Day, but why Google would index the publication and not a section is a little baffling. 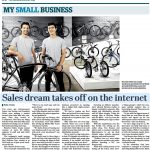 I did eventually find it but not through Google but via the navigation on TheAge web site:

* This may be the reason we could not find the article.  As you can see in the screenshot of our iPad, the headline read “Sales dream takes off on the internet” but the online version has the headline “Online bike venture riding high”.  We googled the new headline and bingo, Page 1 Position 1:

I get this one more than most people because of what I do.  I read an article in the paper (most often TheAge) which gives me an idea for an article that I wish to write.  I write my article and want to link my article to TheAge.  I google the headline and instead of seeing the result in TheAge, I see a bunch of results from a bunch of other Fairfax Publications.

Now you may say, “whats wrong with that”, and in some cases it may be ok, but to me, if the article I have read is written by a journalist in Melbourne, and is first published in the Melbourne publication (TheAge) then that should be the ‘first’ result in Google, not in WAToday.  Even more so, if the article is about something in Melbourne plus all of the other criteria, then it must be the first result.

I feel what is needed to help both Google and readers is a “source article” field or notation so that everyone knows which publication is the ultimate source, then Google would have no problem ranking the results in the correct order.  For that matter, I don’t see why an article written about, for, in Melbourne is ranked at all in WAToday, why?  What, because people from Perth want to read the article in their publication.. nahhh!