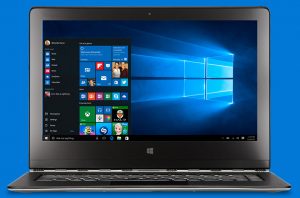 Like many, on Saturday 1st August 2015 I downloaded and installed Windows 10 replacing my Windows 9 operating system.

Largely the download and install went very well.  I worked on a second PC during the update which took over an hour.

On finally installing, a welcome screen invited me to customize Windows 10 or go with the standard configuration.

I chose the standard settings and soon after gazed at my new screen.

Like any new software, there is a learning curve with much to take in and get used to.

Many of the icons are the same as my Windows phone so that helped me getting used to the new look.

The START button at the bottom left of the screen is replaced with a white angular Windows icon.  There are new icons that are worth taking a look at including search, task, store and other often-used icons.

The pop-up slider is pleasing to look at, displaying many of the same links and programs as before but with a more icon feel.

The issues I faced were minor software glitches that so-far have been easy to fix.

* Highly recommended.  I have used synergy for years and it gets better and better.  It works fine with multiple pc’s, screens, types of computer (PC and Mac), operating system.  Yes, sure there is the occassional bug, but nothing a quick reboot wont fix.